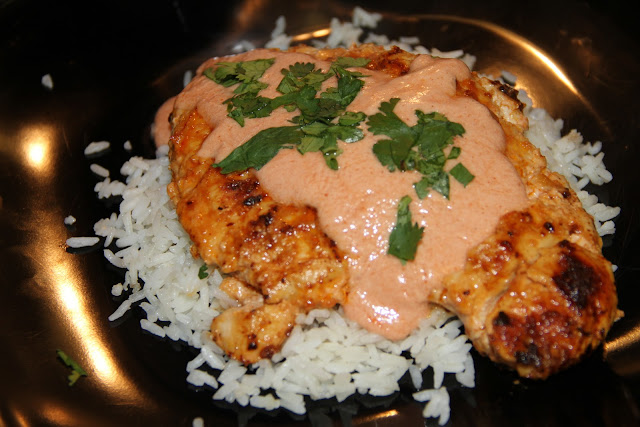 I found this gem of a recipe at Bev Cooks. As I'm sure is obvious by the name of the dish and the look of the sauce, this was a spicy little thing. Of course, that's what made us love it! This is one of those dishes where you need to marinate the meat ahead of time to get the full flavor, and man, am I glad I did!

Here is the cast of characters for the marinade/sauce.
(I hope my dad isn't reading this post. He has a thing for Heinz ketchup and may disown me when he sees I used this weird off-brand.) 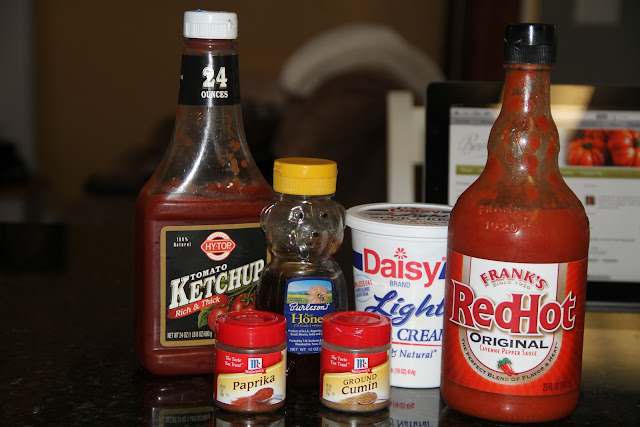 I mixed all of the liquids together, and then sprinkled the spices on top. (I didn't actually measure anything. I like to live on the edge.)

I whisked them all together with a fork until it was nice and creamy. 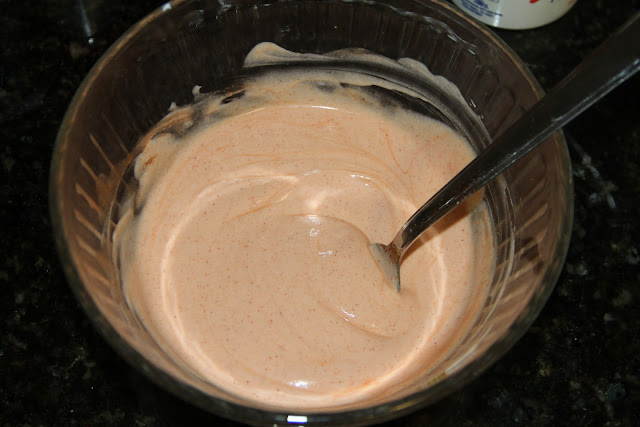 I used two big chicken breasts for our meal. It fed the two of us quite nicely, with an extra meal for one of us for lunch. (I just realized that John stole it to take to work today. Spoiler alert: he loved this meal!) 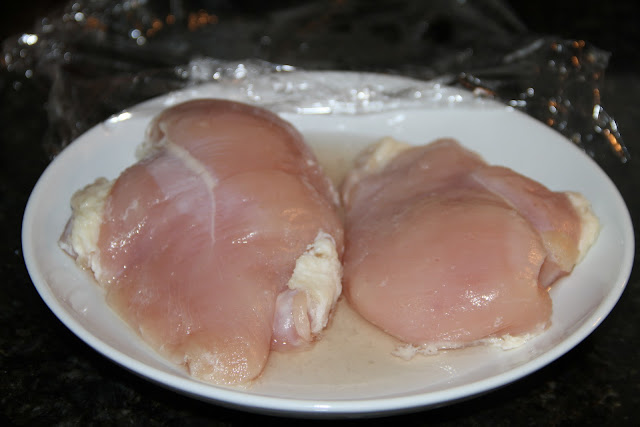 I put the two pieces of chicken in a gallon-sized baggie so I could thin them out. I really need to get one of those kitchen mallets, but I don't have one. 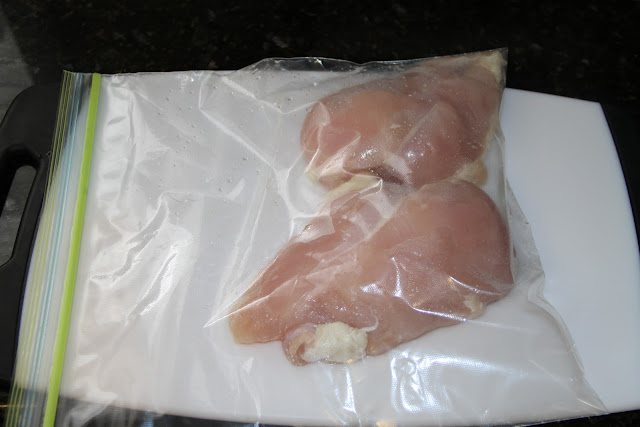 Sometimes I use one of our mini cast iron pans to do this, but this time I tried a rolling pin. (Doing more hitting than rolling.) Definitely not ideal, but it worked out ok. Thinned out chicken is a billion times easier to cook, especially on a stovetop. 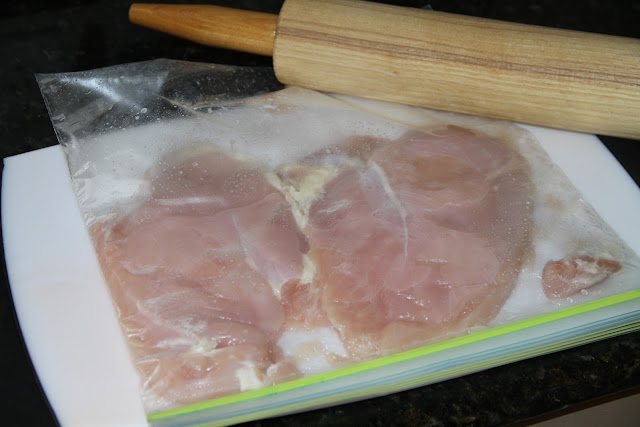 Then, I dropped my chicken into a separate bowl (using tongs, of course). 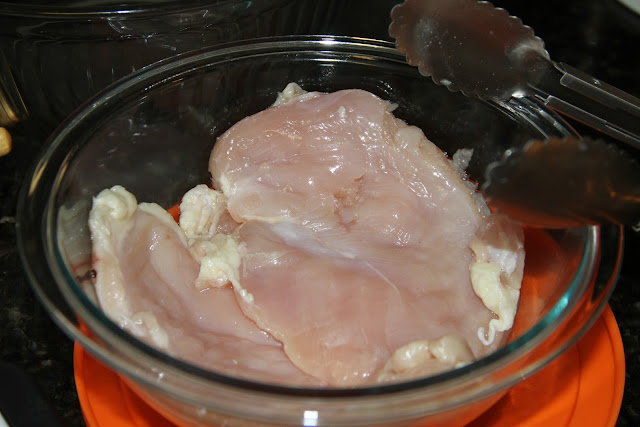 Keep it separate from the sauce, because only half of it will be used as a marinade. The other half stays bacteria-free to be used as a sauce at the end. 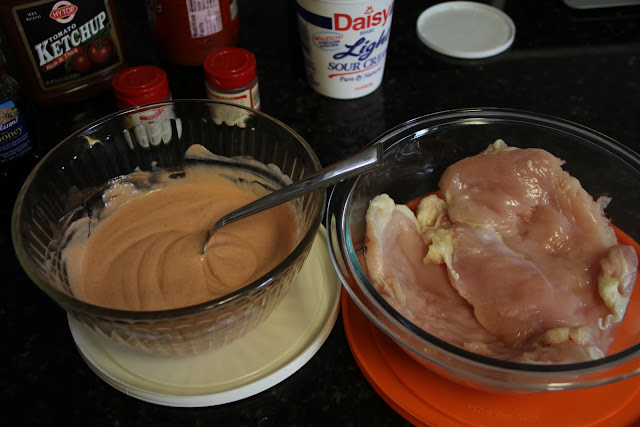 I poured half of the deliciously spicy diablo sauce on top of the chicken.... 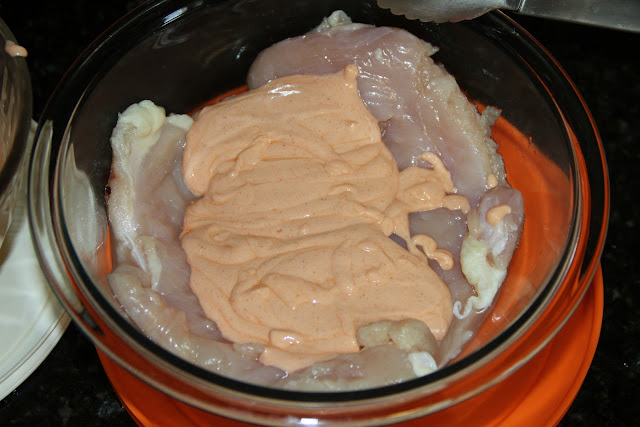 And then mixed it around and evenly distributed it. I put it back into the fridge for about 5 hours. (2 hours is plenty, but I did this first part on my lunch break, and then cooked the rest after work.) 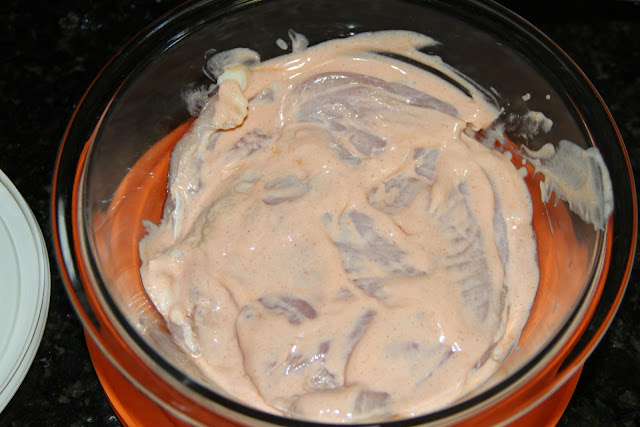 Conveniently, I didn't have to make any rice this time around, since I had leftovers from our Kung Pao Chicken the day before!

To freshen up the rice (it had gotten pretty dry in the fridge), I added some more chicken stock, and a splash of water. 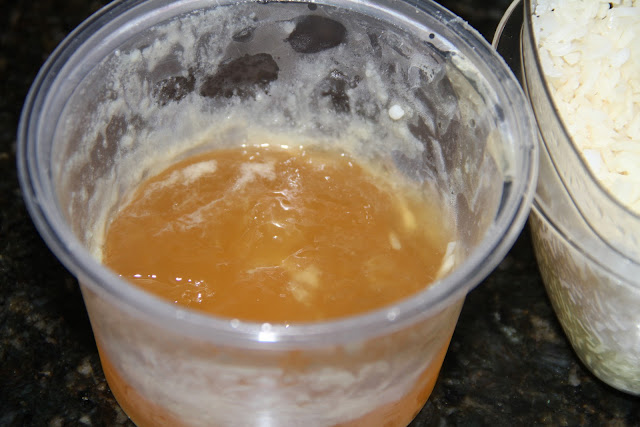 And then microwaved, loosely covered, for about a minute. It still turned out a bit dry - I think I could have used more water. 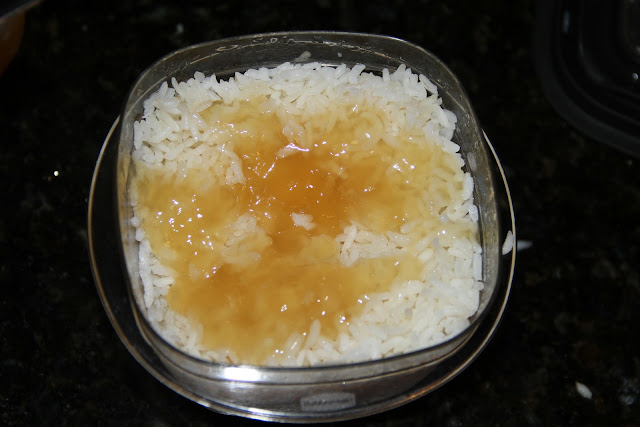 When it was time to start cooking, I minced up my 3 cloves of garlic. 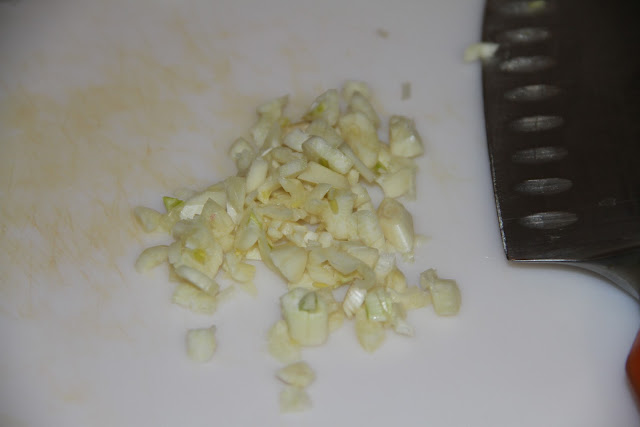 And then added some of my favorite Wok Oil to a pan. 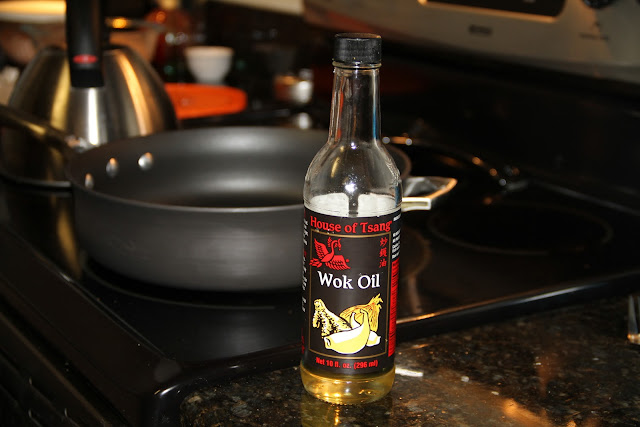 About 2 Tbsp worth of oil. 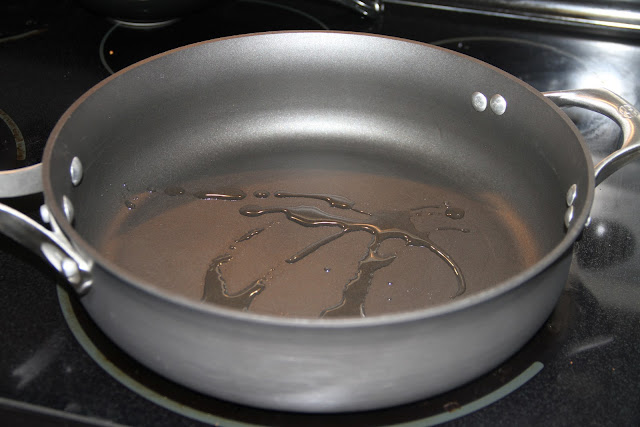 Put the garlic in and let it sit for around 30 seconds, until it smelled delightful. 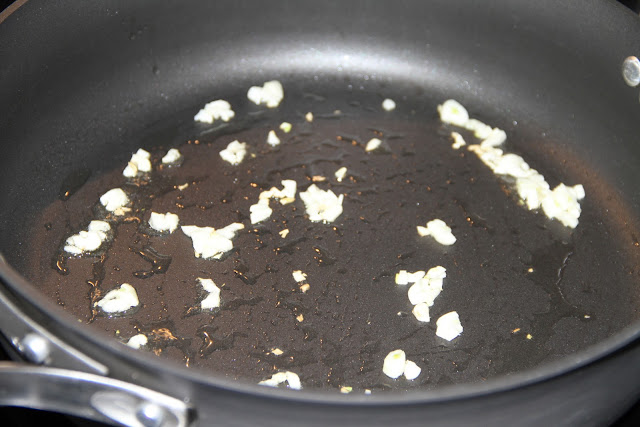 I quickly added my chicken to the pan, and got that cooking. 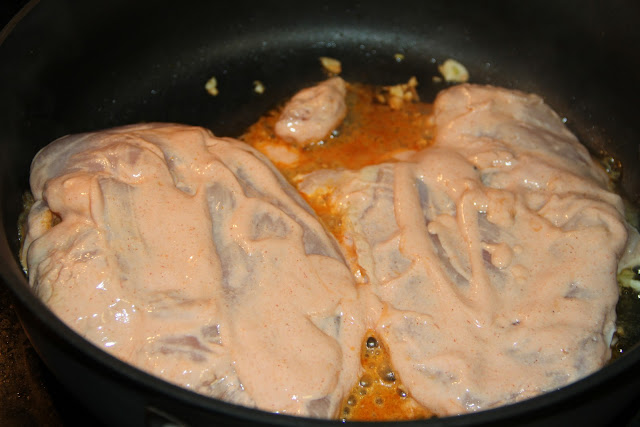 I put the extra sauce I had reserved into a small pan on low, just to get it warmed up. 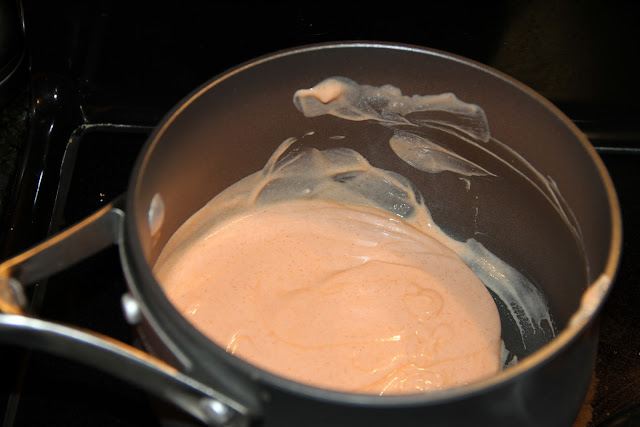 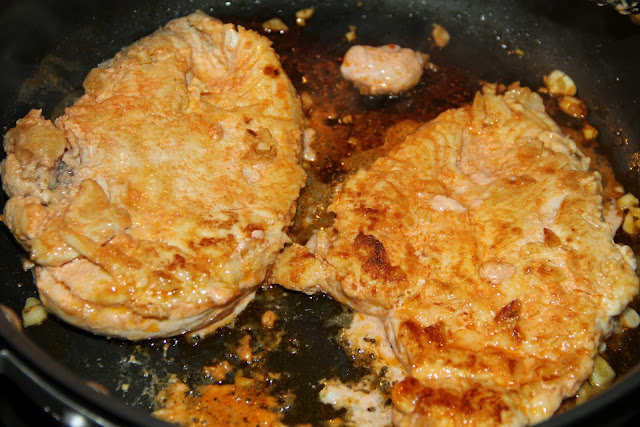 And then here it is, just about done! 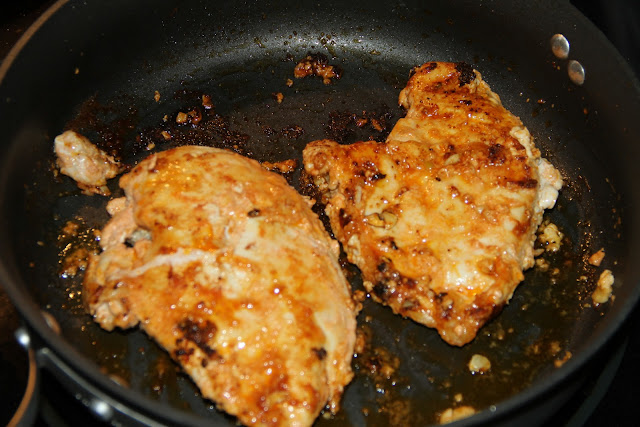 When it's fully cooked, put it on top of a bed of rice, with a scoop of the extra sauce, and a handful of cilantro. (Or scallions, but I was out.) 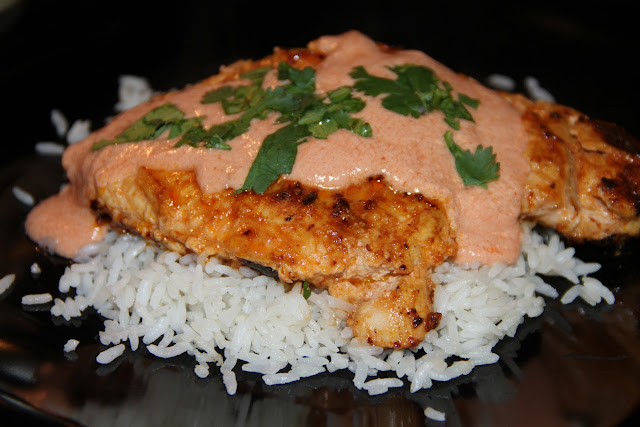 YUM! This was another winner. We've been on a pretty good roll lately, but this one stood out. I think John's exact quote was, "This may be the greatest thing you have ever made. Ever." This, despite the fact that the rice was a little dry. Imagine if I had made it fresh and fluffy!

We will be adding this to our repertoire.

What is your favorite spicy chicken recipe? 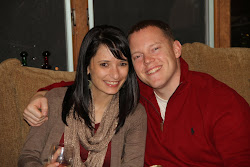